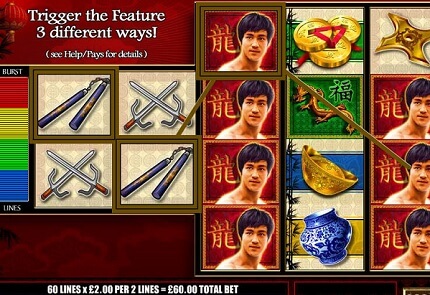 Bruce Lee is an online slot with a slightly different layout to regular online and brick and mortar slots. The game has sixty paylines and the usual five reels but the first two reels only have two symbols per reel. Bruce Lee is a part of WMS’s Money Burst slot catalogue. All of the sixty paylines are optional and can be played for as little as 0.01 per line, or as much as 2 coins. This makes the maximum bet 120 coins per spin or the minimum bet as little as 0.01 per spin. Playing with such a small bet means that you probably won’t hit the feature, but it will appeal to players of smaller budgets.

Bruce Lee is a game all about the Asian martial artist and movie star Bruce Lee. The graphics in the game are all theme based, and drawn in a 2D style that looks a bit like ancient Asian art. The slot background is a plain red with the impression of bamboo plants in the upper left hand corner. Bruce Lee is a very simply laid out game, which will make it attractive to novice players as they can easily navigate around it. At the bottom of the screen is all the player info and betting info. Players have two choices of layout here, either the traditional way or the Quick Bet system.

All of the symbols in Bruce Lee are either from Bruce Lee himself or have to do with ancient Asia. There are no poker card symbols which is always a nice thing to see. On the reels we can find various weapons at the bottom of the paytable. These are all traditional weapons and include a ninja star, nunchucks, hand swords and a dagger. These will pay out up to 120 coins at maximum bet for five of a kind on an active payline.

Next in line on the pay scale we have artefacts such as a Ming vase, coins tied together with ribbon, a scroll and a golden hat. The highest paying symbols are the games logo, a golden dragon and two representations of Bruce Lee himself.

The headshot of the famous fighter doubles as the games wild symbol nd can be found on any of the reels. This is not only the highest paying symbol in the game, awarding you with 800 coins at maximum bet for five of a kind, but it will also replace all other base game symbols to create more winning lines. This wild can become stacked on the bigger reels.

Bruce Lee has one main feature, which is a free spins round. This is launched by finding the feature symbol on any of the reels. This is a red box which is edged with gold. Three or more of these will grant you with various free spins which can be triggered in a number of ways