The iron maiden is a signature feature of any medieval dungeon in Hollywood epics, but in fact the torture device was a made-up creation of Victorian Gothic novelists. The NetEnt online slot Mythic Maiden, judging by its title, is therefore somewhat tongue-in-cheek, but nevertheless the forbidding iron casket that stands alongside the transparent reels in an ornate frame, backed by the creepy artifacts of a torture dungeon, gives this title a dark atmosphere that is enhanced by the sound effects.

Mythic Maiden uses the standard five reels, each displaying three windows. There are 30 adjustable paylines, and players can set coin denominations between 0.01 and 0.25, playing from 1 to 10 coins per line. So it is accessible to low and high rollers alike, although players on a budget will find the game more profitable if they stick to a 10-coin bet on all 30 paylines, and adjust the coin denomination to suit their pockets.

Even the Poker Symbols Conform to Theme

The grisly atmosphere is carried through into Mythic Maiden’s five low-value icons, the 10, J, Q, K and A drawn from the Poker deck. These are fashioned as dribbly candles, of the sort that might provide a ghostly flicker for ghastly dungeon doings. All require three matches or better on a payline to win, and five As take the top prize for these symbols: 125 coins. 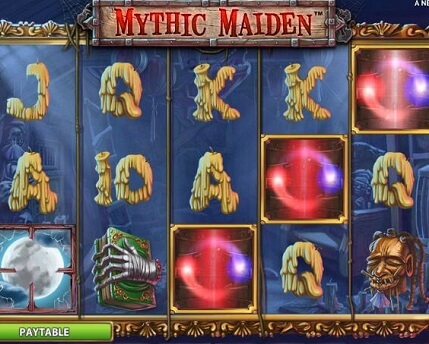 In another witty reference, this time to the werewolf legend, Mythic Maiden uses a full moon shining through a broken window as its Wild symbol. It can substitute for any other symbol except the Scatter to complete wins, and any wins that include a Wild receive a X3 multiplier.

Swirling balls of cosmic energy within the iron maiden form the Mythic Maiden Scatter symbol. They win no payline prizes, but three, four or five Scatters in any position on the reels will trigger a round of 10, 15 or 30 free spins, respectively.

During a Mythic Maiden bonus round, the iron maiden to the right of the reels opens up, to reveal the swirling cosmic energies within. At the end of each free spin, these energies resolve into either an additional +1 or +2 free spins, or a multiplier that can be as high as X10, which is then applied to any wins made on that spin.

This feature, clearly, makes the Mythic Maiden bonus round the section of the game in which players can score the most impressive prizes, especially if a Wild has already increased a prize by X3, and the iron maiden then adds another multiplier to the score.