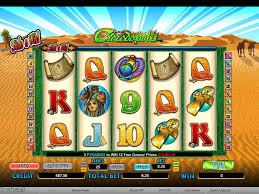 The Crocodopolis slot game is a creation of Next Gen Studios. It stands apart from other slot games for a number of reasons, not in the least due to its highly unusual theme. The base of the theme is ancient Egyptian culture, which is not in itself unusual. What is unusual is that apposed to focusing on Cleopatra, the game uses a bizarre crocodile headed creature, dressed in full Egyptian garb. Looking more then a bit disturbing, this creature is the central focus of the Crocodopolis slot game.

But don’t be concerned, as weird as the creature is it also happens to be the player’s closest ally. The crocodile headed monster features in the bonus feature of the game, titled Slide a Wild, which is the second reason that the game stands apart. But we’ll look more closely at the special features later.

The core game play of the Crocodopolis slot game is a 5 reel, 25 betting line system. The betting lines are manually adjustable, able to be raised or lowered between spins, making the game an interesting affair even without the Slide a wild system.

Notice also the gamble button, housed to the left of the spin button. This feature allows players to take a shot at doubling, or even quadrupling wins once they have been achieved. Press the gamble button after a standard win and simply guess the colour or suit of the face down card. Guessing correct will instantly increase the win.

Mention has already been made of the crocodile headed monster, so let’s have a look at some of the other symbol designs. The four faces in the main symbol, one of which is the bird headed Horus, another the dog headed Anubis, the third appearing to be a Ninja Turtle of some sort, and the fourth a man, are the most valuable standard symbol in the game. Match this symbol five times and the payouts will be impressive. The scarab beetle, ankh and scroll have less value, but will still be worth keeping an eye out for.

The crocodile monster appears as the wild symbol, and will match with any other symbol to create a matching sequence. The scatter symbol, shown as a golden pyramid, will grant 12 free spins if matched. During free spins all wins achieved will be doubled with this online pokies game.

At the top of the play area is a small button titled Slide a Wild. Move this button from one reel to the next by pushing the arrow buttons. Whichever reel the button is above will have bonus features activated, which will be indicated by the crocodile monster. Some of the bonuses include multipliers, extra wilds, and stacked wilds.

Keep in mind that the Slide a Wild button in the Crocodopolis slot game is always active, even if in position one on the first reel. This means that no extra costs are required to gain at least one special feature. Hence, it is a good idea to move the Slide a Wild feature into your preferred position before taking the first spin.